Concentrated Solar Power: the missing link in the decarbonization of road transportation

Mass adoption of electric vehicles (EVs) could dramatically reduce carbon emissions in transportation. But unless EVs are charged with renewable electricity, having more EVs on the road will result in higher emissions. Especially if most users choose to charge at night, when variable renewables, such as PV, are unable to produce power.

Concentrated Solar Power with thermal energy storage solves this problem because it can dispatch renewable electricity at night. Additionally, it enhances grid flexibility allowing more variable renewables on the grid.

With transportation emissions on the increase, to the detriment of public health and climate change mitigation efforts, policy makers should consider CSP as part of the solution to enable the decarbonization of road transportation.

The grip of fossil fuels on power generation has been weakened in most developed nations. Particularly in places like California and much of western Europe, where the uptake of renewable energy coupled with improved energy efficiency have led to significant reductions in the carbon intensity of almost every sector, including manufacturing, power generation and residential combustion. There remains, however, one realm where fossil fuels still hold sway: transportation.

Pollution from road transportation: a climate and public health issue

As overall carbon emissions in the EU fell by 24% between 1990 and 2014, transportation emissions grew by 17%, according to a report by the European Environment Agency (EEA). Increased demand for transportation, far outweighing efficiency gains, is to blame for this increase.

Electric Vehicles (EVs) are the front-runners in the decarbonization of road transportation. Since they rely on electricity, driving EVs emits zero carbon emissions and none of the harmful gases emitted by gasoline and diesel-powered cars. Improvements in affordability and range, with recent models reaching 200 miles on one charge, have made EVs real contenders in urban and inter-urban environments.

The expansion of EVs would result in a substantial increase in energy demand. A scenario drafted by the Institute for Applied Ecology that puts EV market penetration at 80% of the passenger fleet by 2050, also estimates that 150 GW of power generation would have to be added across Europe to meet increased electricity demand. Should most of this energy come from renewables, road transportation emissions would fall by more than 80%.

In a country where the energy mix is dominated by fossil fuels, the expansion of electric vehicles would lead to higher emissions. Although emissions would move away from city centers, bringing perhaps reductions in urban pollution, overall emissions would increase significantly; particularly if the extra energy required to power EVs is generated by coal-fired plants.

The only way to truly decarbonize transport is to charge EVs with renewable energy. The trouble is that renewable generation and EVs charging tend to be out of step. PV generation peaks at round midday and then wanes over the course of the afternoon before reaching zero when the sun sets. Wind production is less predictable, as it is subject to meteorological changes. Unfortunately, it is likely that users would decide to charge EVs at night when renewable energy generation is at its lowest and fossil-fired plants step in to fulfil demand.

This mismatch occurs for two main reasons: firstly, relative lack of recharging infrastructure close to workplaces would lead users to charge EVs at home, at the end of the working day. Secondly, cost conscious EV users might decide to recharge later at night when electricity is cheaper due to lower demand. Either way, the result is an increase in demand when fossil fuel plants are most active, bringing higher emissions. 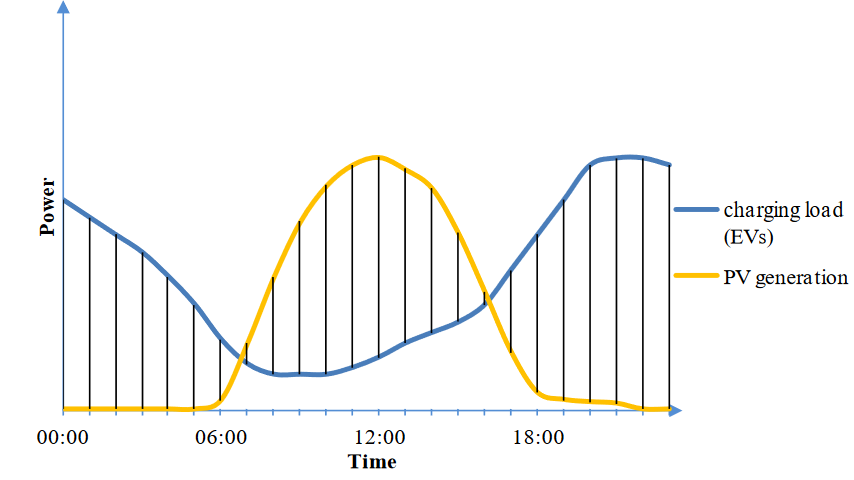 Storing renewable energy produced during the day and dispatching it at night would address this mismatch. Currently there are various technologies that could achieve this, with the best choice of technology depending on conditions at each location.

Pumped hydro storage is a proven, large-scale storage technology but is limited to a handful of sites where two large bodies of water are located in close proximity and at different altitudes (you can see a list here, courtesy of the ESA). PV with batteries could also fulfil nighttime demand, which is already steep in many places and would be accentuated by mass adoption of EVs. In island environments, such as Hawaii, PV with batteries is already being deployed in favor diesel generators.

In locations where the sun is strong and skies clear (marked red and purple on Figure 3), Concentrated Solar Power coupled with thermal storage (TES) could be the best option to meet nighttime demand with renewable energy. A 2016 study by NREL estimated that CSP with six hours of TES has lower lifetime costs, as measured by levelized cost of energy (LCOE), than an equivalent PV system with six hours of batteries. 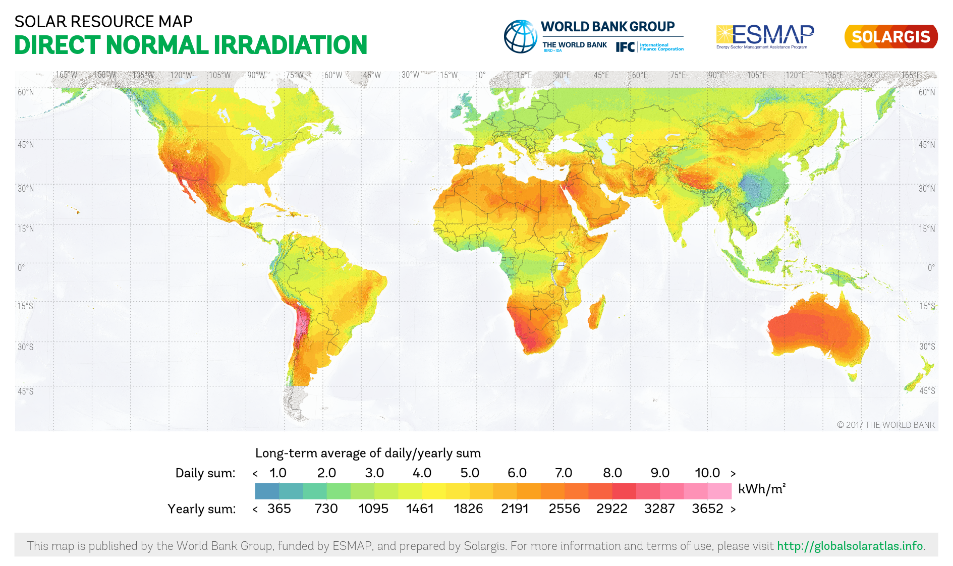 Locations with Direct Solar Irradiation (DNI) higher than 1800 kWh/m2 per year could deploy CSP with TES to supply nighttime peaks and increase grid flexibility, allowing a higher share of variable renewables such as wind and PV on the grid

Additionally, CSP with TES also has the added benefit of allowing more variable renewables, such as PV and wind, onto the grid by increasing grid flexibility. This is a crucial matter, as achieving a high share of renewables into the grid is essential to decarbonize road transportation. Variable renewable resources could produce high levels of energy when demand is low; if production exceeds demand, the grid operator would have no option but to spill the excess supply. This practice, known as curtailment, wastes energy and reduces renewables’ ability to displace fossil-fired generation. A study carried out in California estimates that once PV reaches 20% of penetration in the energy mix, the curtailment rate is 23%. In stark contrast, there is no curtailment when the 20% solar share is divided equally between PV and CSP with TES.

Fig 4: Marginal curtailment rate of PV once it reaches 20% of California’s energy mix (above) versus zero curtailment if 20% solar penetration is divided equally between CSP + TES and PV (below) (Source: Presentation by Mark Mehos at MENA CSP KIP workshop at Noor Solar Complex, March 2017.) 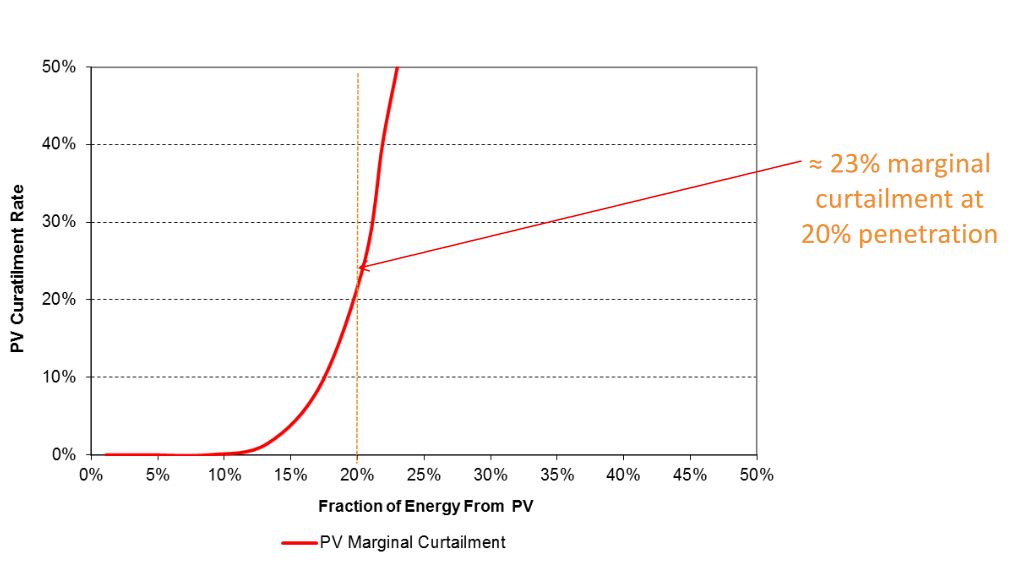 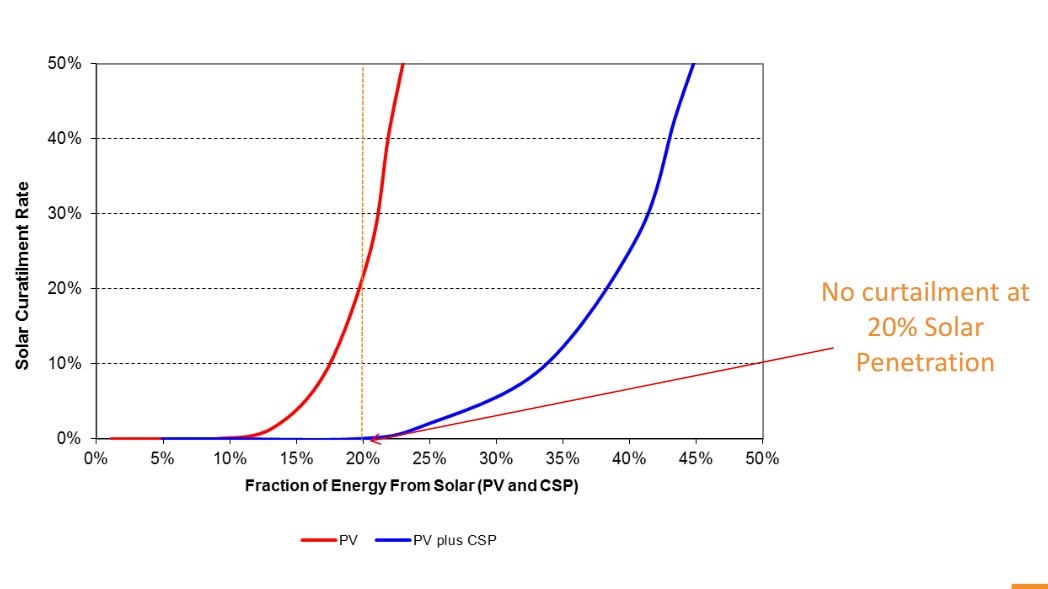 Admittedly, no individual solution could address all challenges standing in the way of a fully decarbonized transportation system. However, in high DNI locations, CSP with TES provides the means to enable more renewables onto the grid and meet peak demand after sun-set. Both of which would facilitate the transition to renewable powered EVs into the mainstream, bringing substantial benefits to the environment and considerable improvements in public health.